Selecting the oven: 5 the advantages of forced convection mode

Before purchasing any equipment worth thinking about, what innovations it appeared. After all, progress is not in place. With companies every year developed a model, complemented by new and very useful features. In this convection ovens.

What is convection in standard and mini ovens?

In order to understand what constitutes this mode, you need to understand what a convection. Under understood convection circulation process of warm and cold air in the oven: Heated air rises, and the cold drops. This happens until, until the temperature inside the same will not.

Based on the foregoing,, it turns out that this feature is available in each oven, and this is partly true. So what is the oven with convection? It would seem that it is a regular oven, but it is actually not so simple, because convection oven is different.

There are two types of convection: Free and forced. first, as discussed above, available in each oven, but the second is hereby additional mode. The role of the convector in this case assigned to the fan, which is mounted in the rear wall. Usually, it is included separately and runs on electricity. Consider the pros and cons of each type of.


As can be seen from the table, forced convection in the oven, much better free.

Convector Built in the oven can be as simple as, the main task of which is to distribute the heat evenly throughout the oven, and distinctive. These include: 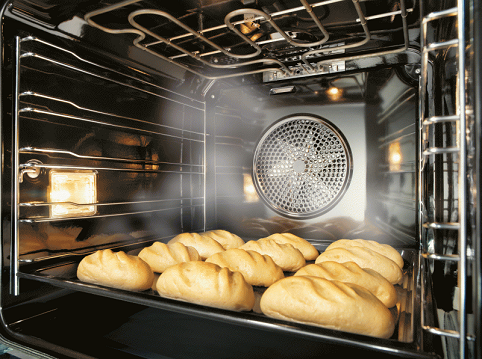 Each of the convector his own good. Eg reinforced especially well suited for grilling meat. In this case, the fast flow of hot air contributes to the formation of crusts, which in turn makes the meat dry up. Convectors heating circuit added to the heat in the oven, thus allowing, if necessary to evaporate the excess liquid during baking dishes with tomatoes or zucchini.

Oven as an oven: the principle of operation of the new regime

To do this, the plate panel has a special button. After pressing the fan, which accelerates the flow of air, thereby contributing to a more rapid heating of the oven.

convection oven, undoubtedly, It has its advantages. One of them is the improved air circulation, produce the desired results with a minimum of effort. Consider compared:

It is worth noting, that once the temperature inside the cabinet reaches the relevant limits, fan automatically shut down. So do not be afraid of the additional electricity costs.

Built-in gas oven: with or without a convector?

Most of the housewives prefer gas stoves, and it is no accident, because gas is cheaper than electricity. So what convection a gas stove? This is a common gas oven, complete with fan, working, usually, from electricity.

Despite, that the stove with convection is worth much more expensive than normal, it is best to give preference to her. Learn, Whether equipped with a gas oven desired function you selected will help the badge. He also points to the, how convection in a plate: strengthened, with loop or wet.

How does convection icon?

On the front panel of the oven, there are special icons, designating all of its functions. They are quite simple and clear. Since the heating elements are denoted by a dash, and convector like a fan or a propeller plane, so guess what this sign is not difficult. 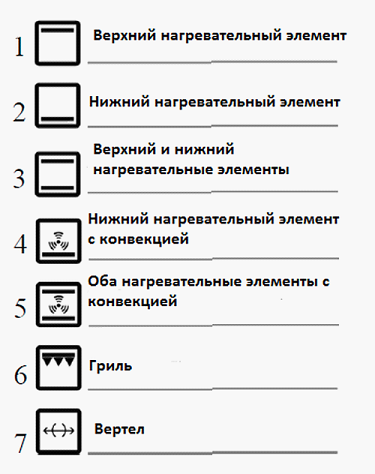 Despite, electric oven with a fan that is often just two heating elements (up and down), she also has a significant drawback - the uneven cooking. Bakery products, as well as other dishes, burn from the bottom and from the far wall. To avoid such an outcome owner has to constantly change the side of the pan and turn the dish itself.

Convection in the electric oven will not only help avoid such troubles, but also gives baking rouge. Thanks to the fan, the heat in the oven evenly distributed, not just at the edges. This then allows to obtain excellent results even when cooking several dishes simultaneously.

Grill function for a long time known to all housewives. But convector grill with a brand new concept. Oven with convection and grill is endowed with the following benefits::

conclusion: Do I need a built-in convection oven?

Oven with convection - the dream of every housewife.