Installation and adjustment of loops of kitchen furniture

When the described manufacturing process independent cabinet, usually operation hanging doors is given not so much attention. Installing the furniture hinges on the kitchen door and sometimes only mentions, because it is considered a routine operation. Really, particular difficulty setting loops is not but just, who already have relevant experience. For beginners it is better to first familiarize yourself with the required sequence deystviy.Segodnya at hardware stores and hypermarkets of building materials is offered a lot of very different designs for furniture fittings, including loops. When undertaking the repair of kitchen furniture, it is important to understand the design features and calculate your abilities.

Generally for cabinet hinges are very diverse, however, in practice most often used is quite similar in appearance samples. In the more expensive models, there is closer and quick mechanism. You can verify this, examined almost any ready cabinet.

Here is the most used door hinge for furniture

The popularity of this design is due to its ease of adjustment. Even if you make a mistake and hinges for the cabinet door attached little uneven there is a chance to remedy this situation at the expense of a comfortable and easy adjustment.

As seen, such loop has a somewhat complicated structure, than those loops, that it was once used for hanging doors Soviet cabinets. This means, that such a loop more complex and functional mechanism for soft closing and bystrosemom.

A variety of models and designs

It is important to take into account the, that there are different models of door hinges and they differ significantly in opening, size and mechanism.

Typically, during assembly of cabinets with hinged doors using hinges overhead chetyrehsharnirnye ( frog). Unlike the design is the high reliability and versatility. They provide a range of door opening 90 to 165 degrees. 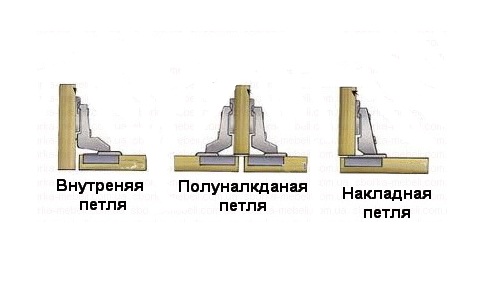 To assemble the corner cabinets are often used angular furniture hinges. Their task is to mount the facade to the box at the required angle - usually in the range of 30 to 175 degrees.

The so-called inverted loops are used in cases, wherein when the opening flap is to form the side wall angle 180 degrees.

Sold and additional door opening mechanism TIP-ON to help open the flap by pressing without handles.

How to install furniture hinges

Most attention in the loop design deserves a bowl. From the pictures it is clear, that it should literally be inserted into the surface. To do this, Hole (roughly speaking, unfinished, no through hole), and very respectable diameter. The usual drill a hole can not be done, You have to use a special cutter diameter standard 35 mm, but there are also other 25-32 fitting holes mm.


The illustration shows two cutters standard and slightly modified. It is useful to have both. Start cutting the hole better than a conventional mill, but will then be best to change it for a modified. The reason for the existence of a standard cutter tooth projecting forward. Members may inadvertently cutter drill through hole instead of the hole, and a tooth in the milling cutter, this contributes very.

The hinges should be installed so, to secure and maintain the door without distortions. Therefore, when mounting furniture hinges important as closely as possible to mark the surface of the cabinet and the door, designating a place for cutting holes for cup hinges and screws for screwing.

In conventional hinged door cabinets using fastening two loops. In a more solid models with high solid door will need to install at least three loops. All of them should ideally be exactly on the same axis. The lower loop is mounted at a height of not less than 7-12 centimeters.

The geometry of the corner cabinets makes furniture masters used for hanging doors for such special cabinets loop. However, understand, how to hang a door corner cabinet, pretty simple. In itself, such attachment loops complexity is no different, but immediately it needs to take into account the fact, that the angular loop when closing the cabinet a little call in the inner space. Considering this, will have to cut back on a few shelves depth, because otherwise the corner cabinet door just will not be able to close.

How to adjust the loop on the kitchen cabinet doors

Now let's look, Under no fault may be necessary to adjust loops on the kitchen door. In the closed state of a door above the other. It should one of the doors to raise or lower the level of the second.

To do this on a loop of the door problem loosen two screws to adjust the height, align, focusing on the second door, and tighten the screws back. If the gap between the closed doors is too large or irregular (expand or narrow down). Using a proximal hinge screw, move the door toward each other (or vice versa, if there is no gap at all, and cling to the door of each other). In this case, adjustment of the bottom hinge is responsible for the lower side of the door, top - the upper side.

In addition, we recommend to watch the video of the installation of kitchen loops.